The Raze of the Historic Haussner’s

Demolition has begun on the building that used to hold the famous Haussner’s restaurant in Highlandtown.

Peter Garver, the developer of the site, is planning a six-story building with 65 apartments, a full parking garage and first-floor retail space. The site is located at 3244 Eastern Ave. 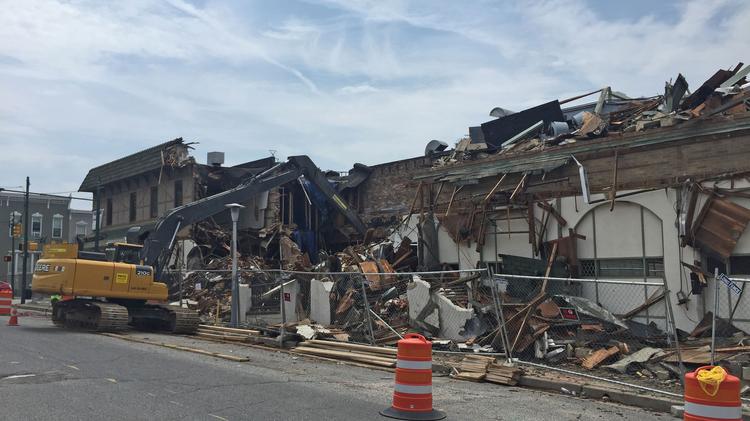 Access Demolition Contracting Inc., which is completing the demolition, said in late May it was waiting on permits to begin the process. Plans for the new mixed-use building have already been approved by the city’s Urban Design and Architecture Review Panel. The photos above show the current state of the building as deconstruction begins.

Haussner’s Restaurant was opened by William Henry Haussner in 1926 and became one of Baltimore’s most famous landmarks over the next 73 years.

In addition to ‘old-world’ style food, including Baltimore’s finest crab cakes, the restaurant housed a large collection of fine art, which decorated the walls.

The art had been acquired over the years. Over the next 73 years, the Haussners acquired over 100 pieces, including highly important works by 19th-century European and American masters.

The restaurant was closed in 1999, and the collection, which included pieces from the estates of J.P. Morgan, Cornelius Vanderbilt and Henry Walters, was auctioned by Sotheby’s in New York City for $10 million.

The site of the restaurant was purchased by the owner of the former Baltimore International College. In 2011, the site was purchased by Joseph Schultz, owner of Schultz Development LLC, a Baltimore home and rehab company. While there has been much speculation over the future of the site, the site has sat vacant since it closed. The restaurant officially served its last meal on Wednesday, October 6, 1999.

Haussner’s Restaurant was located at 3244 Eastern Ave Baltimore, MD 21224-4012 (originally, 3313 Eastern Ave). A reproduction of Haussner’s served as the setting in the television show, Mad Men.

Haussner’s was demolished in July 2016 by Access Demolition & Environmental Services. Old Town Construction will be constructing a 6 story high rise apartment building in its place.